The history of the Canada Games is a litany of "can do" in the best Canadian tradition, and that creed was never better exemplified as in 1969 as the city of Halifax-Dartmouth literally had to move an island to get the water events underway. Those Games were also very important as they gave us many things including the official games symbol, the official games song, the Centennial Cup, the Canada Games flag, and the overall make-up of the early Canada Games Council. These first Canada Summer Games proved to be an enormous success as well, as over two hundred thousand spectators showed up to watch baseball and softball alone. The Canada Games flag was won by Ontario again, as they finished on top of the scoring.

Having two cities host the Canada Games posed a challenge for the legacy of the remaining infrastructure after the Games. In true eastern style the events were shared equally between the two cities. Halifax got a lighted softball facility, new law bowling greens, half a dozen tennis courts, and a new 50 meter, six –lane indoor pool with five, seven and 10 metre platforms, and a new $200,000 stadium, seating 9,600, at St. Mary’s University. Dartmouth got the new water courses on Lake Banook, a new track at Beazley Memorial Field and the Dartmouth Commons, a rough and unused field, was converted into a fine softball facility with permanent bleachers.

There were budding Olympians in the field of athletes competing. British Columbia jumper Debbie Brill won gold and missed setting the Canadian record by less than three centimeters. Diane Jones took the silver in the high jump and won Saskatchewan’s only gold in the pentathlon, and, met her future husband. John Konihowski took a bronze in the triple jump, and later went on to star as a pass receiver for the Edmonton Eskimos in the Canadian Football League. Unexpectedly, baseball and softball drew the largest crowds during the Games. More than 200,000 fans came out to watch athletes play ball. One of the most rousing moments came on the last day of competition during the men’s war boat race. Behind the cheers of their home fans, Nova Scotia narrowly beat out British Columbia for the gold medal. 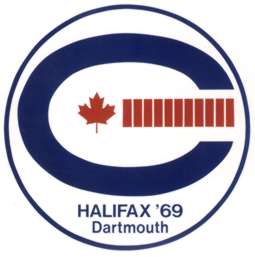