For the second winter games in Saskatoon, there was but one problem; no mountain. So what did the people do? Why they built one of course. Mount Blackstrap was created in the middle of the prairies to host the alpine skiing events, and it was such a hit that it proved to be the biggest draw of the Games. The hockey competition was exciting as well as Ontario took home the gold with a pair of future NHLers named Jimmy Jones and Bob Gainey. The first winners of the Centennial Cup for the biggest improvement over a previous Games of that season was Prince Edward Island, while Ontario had the highest total once again.

Perhaps the greatest infrastructure improvement of the Canada Games was the creation of Blackstrap Mountain. The mountain was not a towering snow-covered peak but a mountain with a vertical drop of 100 meters and a run of about 350m. The total cost including snowmaking, lifts, day lodge and everything else came to about $600,000. As a lasting legacy Saskatoon residents can still use it today for biking in the summer and skiing and snowboarding in the winter.

The first gold medal of the Games was awarded to Manitoba’s Cathy Priestner in the 400-meter race. Cathy was just 14 then, but destined for international stardom, and in 1976, in the Olympics in Austria, she skated to a silver medal. At Blackstrap Mountain, British Columbia’s Greg Athans won the first gold medal on the mountain in the individual slalom. With the novelty of the new mountain, alpine skiing proved to be the biggest draw of the Games. Hockey was second in attendance with 35,000 fans packing into two arenas to watch the action. In the end undefeated Ontario won the gold led by Bob Gainey and Jimmy Jones. Both would go on to become stars in the NHL. 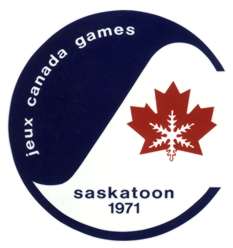