Saint John, New Brunswick played host to the 1985 Canada Summer Games. After losing to Saint Johns Newfoundland in 1977, the 1985 Bid Committee made sure that it covered all the bases to win the right to host the Games. Saint John was referred to as "an enchanted city" for the two weeks of the Games. Competitions were fierce once again as a total of 18 records were set on the new track and field surface. The host province took the Jack Pelech award as the team displaying the best sportsmanship. Ontario won the flag, and Manitoba won the Centennial Cup for the most improved team.

The legacy of the Games left behind $15 million in facilities for Saint John, giving the city an enormous leg up. The new Aquatic Centre took more than $9 million and it was hooked into the Pedway system. The new stadium and track cost about $3.5 million. New field hockey sites were built, along with soccer fields and softball facilities.

New Brunswick field hockey player Brenda Guitard and a surprise guest, Steve Fonyo, the courageous one-legged runner who ran across Canada to capture the imagination of the country and collect more than $9 million for cancer research, lit the Games flame. Ontario won the gold in baseball in exciting fashion with a 10-9 win over Manitoba in extra innings. In a surprising powerhouse performance, the Nova Scotia men swept the gold in diving. 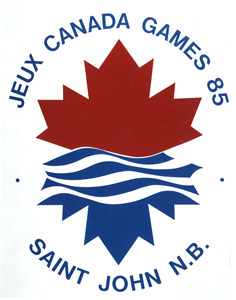