For the Winter Games in 1987, Cape Breton was a natural host. With their distinct culture, hard work ethic, integrity and pride, it was assured that the Games would be colourful, professional and successful, simply because the people wouldn't have it any other way. Nova Scotia then became the first province to host a Canada Summer and Winter Games. Ontario took home the flag, and Quebec won the Centennial Cup. The Games in Cape Breton were made up of 17 different sports. The Jack Pelech award was handed out in a tie, to Nova Scotia and Newfoundland. But as the Games ended, Cape Breton was left with new facilities that helped not only the University but also helped Cape Breton acquire an AHL franchise affiliated with the Edmonton Oilers.

Sydney Board of Trade President Eric Schibler figured about $1 million was pumped into the Cape Breton economy during the weeks of the Games. Friends of the Games managed to raise $3.5 million and ended with a profit of $1.9 million. The money was dispersed around the Island into things like scholarships, help for a hospital for eye injuries, and cultural pursuits as well as sports.

As a result of Sydney having its bicentennial and hosting the Canada Games in the same year a new rink was constructed for the events. Seating about 4000 people and costing $14 million the new rink was a lasting legacy from the Games. About $1 million of the cost came out of the Canada Games budget for the 1987 Games. As a consequence of the building, Sydney acquired an American Hockey League franchise, affiliated with the Edmonton Oilers. An arena with an Olympic sized ice surface was constructed on the Campus of the University College of Cape Breton with seating for 1,800, adding to the legacy of the Games.

Nova Scotia novice dancers Angie Coady and Glenn MacCara, both 16 finished first in the figure skating compulsories and fought off an attack of the jitters to put in the golden skate in the variation dance to win it all. Along the way, young Jim Dan Corbett, who helped light the Games torch in the opening ceremonies unexpectedly grabbed a bronze medal. 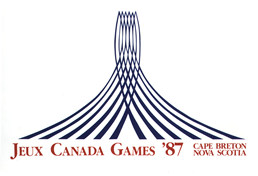