This was the second time for Saskatoon, the only community to host two sets of Games, Winter in 1971 and Summer in 1989 up to that point. Consequently, one would suspect that it should have been easier, and it was, but the ordinary complexity of the Games precludes anything like a "simple task" description. The excitement was evident as this city of 185,000 people brought forth a record 8,500 volunteers to make these Games such a success. The preparation for the Games required a great deal of planning and time. This was no more evident than with the preparations for the rowing venue – the South Saskatchewan River. The so-called channel was too wide, up to 350 metres, and the sand and silt at the bottom tended to move about. So the channel had to be dredged out, and narrowed and constrained to accommodate sufficient flow to prevent sandbars from forming. As the Games ended the host province made the biggest improvement from the previous games by moving up from eighth to fourth and taking the coveted Centennial Cup. Ontario once again finished first and New Brunswick won the Jack Pelech award for best sportsmanship.

The Saskatoon Star Phoenix said that the Canada Summer Games generated more economic benefit for the local merchants than either the curling Brier or the Memorial Cup Hockey Tournament.

Not only were there numerous improvements to sporting facilities as a result of the 1989 Canada Games, but a Games Plaza was also created as a legacy to the Games. The Games Plaza has been used on a number of occasions for special events in Saskatoon including their annual Festival Saskatoon. As a further legacy, there is a nicely bound book of the whole exercise of the Game, from beginning to end, in every school in the Province of Saskatchewan. A group of 80 educators in Saskatoon, all volunteers, put out the book and saw to its distribution so that generations to come will know what happened in this city of 185,000 in 1989, and how it all came about.

There was the experience of Yukon cyclist Kiyoshi Maguire, from Whitehorse. In the 100 km road race, Maguire worked himself into exhaustion and didn’t know how he was going to continue. Just as he was starting to wobble, a cyclist from Newfoundland pulled in and allowed Maguire to draft behind him for "quite a ways". "I was just dead, and these guys were coming up on me," Maguire said, "and one guy slowed up and got in front and sort of pulled me along. He was great." Maguire finished 36th in a field of 37. But he finished. 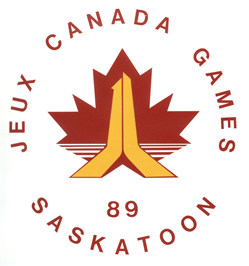