Charlottetown won the right to host the 1991 Canada Games. On Prince Edward Island, those charged with conducting the 1991 Canada Winter Games, chose that time to grasp the Canadian dream, and to underscore the "unity through sport" theme with their own motto, "Welcome Home Canada." At the opening ceremonies, a huge Canadian flag was spotlighted on the west wall of the Charlottetown Civic Centre, about 7,500 people jammed into an arena that normally seats 3,500. That was the symbol to which all speakers in these opening ceremonies responded. These were the first Games to be staged by a whole province acting as one unit. In the final tally, Ontario edged out Quebec by a mere one point victory to retain the flag, Manitoba won the Centennial Cup, and P.E.I. took home the Jack Pelech award.

To gain a better grasp of the significance of the Canada Games, the Business Institute at the University of Prince Edward Island did a study and concluded that the whole exercise had a "positive impact on the Island and the Atlantic region". About $58 million was pumped into the economy.

Up until the final night host Prince Edward Island had not won a gold medal. Their final chance came in the boxing ring with all hopes riding on Mark Docherty. With only 11 seconds remaining on the clock Docherty was able to winhis province the gold by defeating Saskatchewan’s Jeff Wolfe. For the first time in Canada Games competition Yukon skiers hit gold. Lucy Steele won the women’s 5km race and was a member of the winning relay team while Sean Sheardown won gold in the men’s 10 km. To top of two weeks of exciting competition only one point separated top placed Ontario and second place Quebec in flag points. The winners of the Roland Michener award were Scott Chandler of PEI and Michelle Bickerton of New Brunswick. 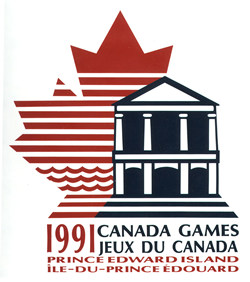