Grand Prairie’s own Commonwealth gold and Olympic silver medalist Willie de Wit magically appearing with the torch in his hands highlighted the opening ceremonies. He then handed it to Ken Lovsin then drove a dogsled and passed the torch to world wheelchair basketball gold medalist Judie Millard who flew above the crowds to light the Canada Games cauldron. Canada’s own Michelle Wright took the stage and serenaded the audience with her youthful spirit, playing tribute to the achievements of participants and organizers alike highlighted the closing ceremonies. After it was all over, it was Alberta who won the Centennial Cup, and Newfoundland and Labrador won the Jack Pelech award. Ontario once again had the highest total points and kept the Flag.

The economic impact of hosting the 1995 Canada Games in Grande Prairie have been immense. In June 1994, Alberta Community Development prepared an estimated economic impact study on the effects of the 1995 Canada Games. Results indicate more than 421 new person years-of-employment were created over a three to four year period, primarily in Grande Prairie. The study shows that for every dollar spent, $1.84 was generated in the provincial economy for a total volume of $31,556,771. In addition, it indicates that the federal, provincial and municipal governments recovered approximately 43 per cent of its direct investments through income and sales taxes from activities associated with the Games. Gross expenditures for the Grande Prairie area totaled $20,280,113 while the total sales volume was $37,750,327.

A tremendous equipment legacy of approximately $200,000 has been left to various Peace Country groups and agencies. The equipment is a gift to Peace Country athletes and offers the opportunity for them to learn and improve their athletic skills. It includes pieces of equipment essential for each of the 21 sports of the 1995 Canada Games.

The Host Society’s creative solution of providing $5.3 million to the City of Grande Prairie to put towards the cost of the $7.8 million Canada Games Arena, brought a "win-win" situation for all parties. The Host Society received a needed facility to host the Games, while the City, its residents and spectators received a facility in which to enjoy sport and cultural events previously denied due to the lack of a large facility. The 4,050 square meter jewel of the Host Society’s Facilities Division boasts 2,550 seats, 6 dressing rooms and on-site catering to name a few. Other facilities were also left as a legacy for Grande Prairie residents to enjoy including the $1.4 million Canada Games Wapiti Nordic Ski Centre and the $190,000 renovations done to the Johnny MacDonald Arena.

The creation of the 8,000 strong volunteer base of which 1,500 are trained in Alberta Best customer service can be counted on to achieve success in future volunteer activities and events. The incredible feeling of accomplishment has spread through the Peace and Jasper communities and is shared with visitors – an excellent quality in communities already known for warmth and hospitality.

One of the highlights of these Games was when Quebec’s Alexandre Jeltkov set a new record for the most medals in a Canada Games with eight, in artistic gymnastics. In the Disabled Alpine Skiing Event, it was Karolina Wisniewska from Alberta who took a sweep of the three gold medals. Jason Parker a speed skater from Saskatchewan took home the Roland Michener Award for the males, while Jean Lessen a weightlifter from the Yukon won the award for the females. 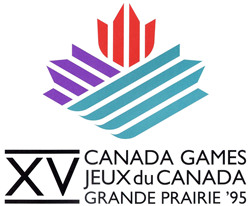