1997 marked the second time that Brandon played host to the Canada Games, the previous occurring in 1979. With Steve Nash on board as an Honorary Chairperson the Games were a tremendous success. Even a horrific storm on the eve of the Games could not stop their commencement. The storm ravaged many of the sites that the Games occupied, but the city rallied together behind an army of volunteers and soldiers deployed to help in the clean up the Games went off with out a hitch. Nineteen sports were included in the 1997 Canada Games togive all the provinces and territories many opportunities to show their skill. When the dust had settled Newfoundland took the Centennial cup as the most improved province. Ontario won the Flag, and Team New Brunswick won the Jack Pelech award. The closing ceremonies included performances by internationally renowned artists Farmer’s Daughter and Susan Aglukark.

The 1997 Canada Games had an economic impact of $5.9 million in capital spending and $7.2 million in operating spending. The Games also created 349 jobs with in the Brandon region leading up to their commencement. In total the Games injected an estimated $35 million into the Brandon economy.

Brandon expanded and trained its volunteer base through the various initiatives of the Canada Games.

With a capital budget of approximately $6 million and a sport equipment budget of more than $500,000, the communities of Brandon, Minnedosa, and Ninette (Pelican Lake) will greatly benefit from the legacy of the 1997 Canada Games.

The 1997 Canada Games helped to put Brandon on ‘the map’, and created a sense of pride and achievement that was instilled in the community long after the Games had finished.

There were many different highlights that helped to define the 1997 Canada Games. One of the notable performances took place in the pool by team BC, who won 7 gold, 8 silver, and 7 bronze claiming dominance in the pool. Kevin Dragon of the North West Territories and Sara Alroubaie of Manitoba both won the Roland Michener award. Internationally renowned Farmer’s Daughter and Susan Aglukark highlighted the closing ceremonies with performances. The crowd was also treated to a unique "dance number" by 30 foot high, country and western clad puppets that will be remembered by spectators for a long time! 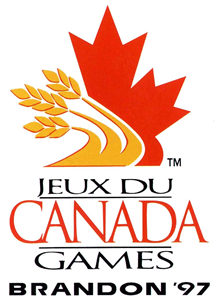