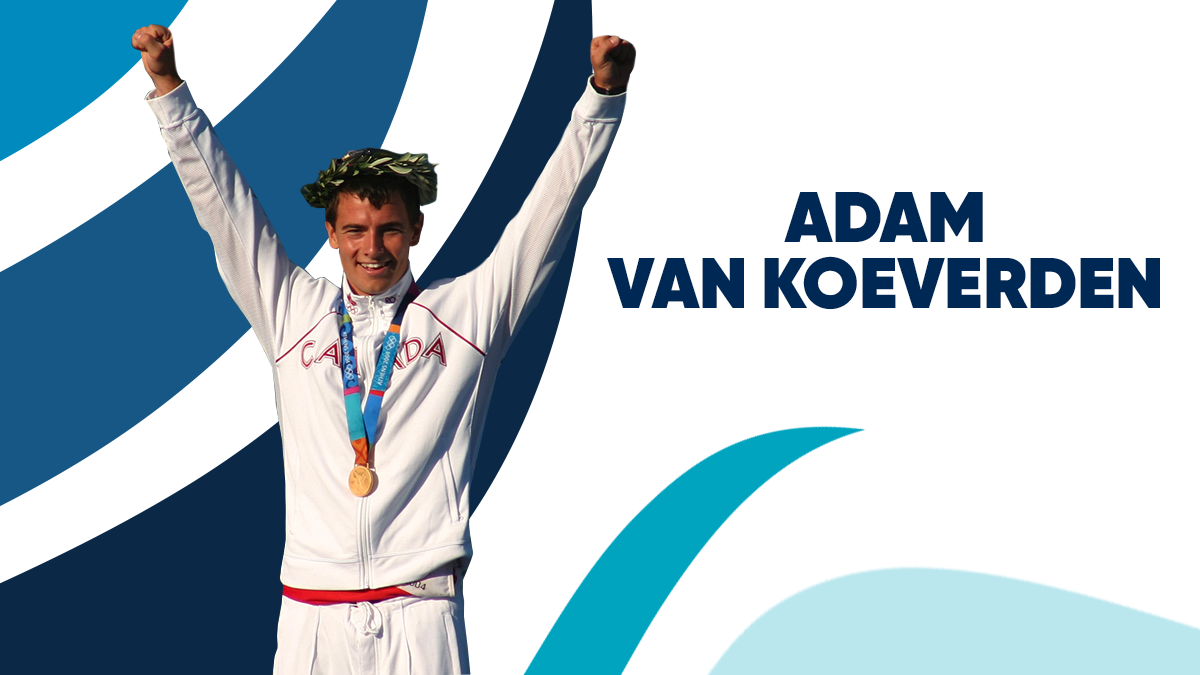 FROM PODIUMS TO PARLIAMENT

A look at how Adam van Koeverden journeyed from Oakville, Ont., to the Canada Games and the Olympics, before eventually settling into his new role in the House of Commons.

Before he became one of Canada’s most celebrated paddlers and a member of Parliament for Milton, Ont., Adam van Koeverden was once just a teenager trying to find his way.

As a 13-year-old living in Oakville, Ont., van Koeverden was in need of some direction in his life and luckily for him, his mother Beata had a solution. Upon seeing an ad in the local paper for the Burloak Canoe Club with the tagline “Future Champions Wanted”, Beata encouraged her son Adam to sign up, a decision that would prove to be a seminal moment for the four-time Olympic medallist.

“My Mom saw an ad in the newspaper, and I was the kind of kid that got into a little trouble after school. I didn’t have a lot of direction in my life, and I just needed a goal,” recalled the 38-year-old van Koeverden, who joined the Burloak Canoe Club in 1995. “Certainly nothing life-changing for most people, but it was pretty life-changing for me, I suppose. I went down and met some pretty inspirational people, some great coaches and I saw hard-working young athletes.

“I just joined a community-sport program like a lot of kids do. And ours [at Burloak Canoe Club] was really fortunate to have world-class coaching, access to national team athletes, and a history of success. So, I was just really fortunate to be a part of that group.”

Founded in 1989, Burloak Canoe Club is one of the best canoe-kayak racing clubs in Canada, exemplified by the fact that it’s placed third or better at 25 of the last 29 National Championships. That stretch included five straight podium finishes prior to van Koeverden’s arrival in September 1995, and the club would soon see its newest member contribute to that success once he got settled into his new digs.

“Racing a kayak is like sitting on a tightrope,” said van Koeverden. “You can’t just sit in it and go for a paddle. It’s something you can take seriously at first, but it doesn't really take you seriously until you got enough hours under your butt in order to even just balance the boat. It was challenging, but [Burloak] was a cool clubhouse with lots of people my age and a little bit older [than me] that seemed inspired, and that’s what kept me going down.”

It didn’t take long for van Koeverden to grow into his new-found sport. By 1997, in his second summer kayaking with Burloak, the student from St. Ignatius of Loyola Catholic Secondary School was off to the nation’s capital in the hopes of qualifying for the Canada Games in Brandon, Man., that were scheduled to take place later that summer.

“I was 15 years old, so I was on the lower end of the spectrum for kids trying out for that,” added van Koeverden, who would have competed against athletes aged 18-and-under at this qualifying event. “And I sort of had a breakthrough race in the trials.

“So, I made the team and raced K1-1000, which was a surprise for a lot of people. It was a surprise to my coach and my parents that I was going off to a Games directly in a different province, cause I had only been doing the sport for about two years.”

Excited that he had punched his ticket to Brandon 1997, van Koeverden was motivated to achieve bigger and better results, which may have been why he decided to engage his father, Joe, in a friendly wager before heading off to Manitoba for the 16th edition of the Canada Games.

“I was using a [Burloak] Canoe Club boat, obviously, because it was only my second summer, and I asked my Dad about buying me a boat if I won a medal at the Canada Games,” recollected van Koeverden.

“He thought that was a pretty good bet in a sense. I think he talked to my coach, and my coach probably told him honestly that I was a long shot at getting a medal.”

Well, likely to the surprise of his coach and father, the 15-year-old van Koeverden went to Brandon 1997 and scored a bronze medal in the K1-1000m event that took place on Lake Minnedosa. True to his word, his father Joe held his end of the deal and got his son Adam his first-ever boat. But maybe, more importantly, that bronze medal at the Canada Games represented a major accomplishment early on in van Koeverden’s career, and his experience in Brandon served as an important stepping stone.

In the summers that followed 1997, van Koeverden continued to improve steadily and was afforded more opportunities to compete for teams outside of his club, which included representing his country at the Junior World Championships in July 1999. There in Zagreb, Croatia, he placed third in the K1-1000m to take home his first-ever medal on the world stage. This was something that would become more of a common occurrence for van Koeverden, as he began to push himself towards qualifying for the Olympics, an event he hadn’t given much thought to prior to his Canada Games experience.

“I didn’t really imagine going to the Olympics before,” recalled van Koeverden. “The Canada Games offers youth that opportunity to be part of a team, a multi-sport team, and go to a multi-sport games, and allows you to start dreaming in colour about what the Olympics might look like, and might feel like.”

As he strived to capture that feeling, the sprint kayaker initially suffered a setback in 2000, when he failed to qualify for the Summer Olympic Games in Sydney, Australia, as an 18-year-old. But the disappointing result proved to be another critical moment in the young paddler’s development.

“Defeat is a pretty good educator,” proclaimed van Koeverden, who would have also graduated high school during the same year of those Olympic trials. “When I didn’t qualify in 2000, I sort of started thinking about what it was going to take, what changes that I needed to make, and how important it was to me.”

Reinvigorated by this experience, van Koeverden never failed again to qualify for the Olympics.

Over the next 16 years, the Oakville native not only competed at four straight Summer Games, but it was during these trips that he blossomed into one of Canada’s most revered athletes. In his first Olympic experience in 2004, a 22-year-old van Koeverden quickly made a name for himself by becoming the first Canadian double-medallist at a Summer Olympics since Donovan Bailey and Canada Games alumna Clara Hughes achieved the feat in 1996.

Van Koeverden matched their efforts by capturing gold in the K1-500m, just a day after grabbing bronze in the K1-1000m. Later that year he was awarded the Lou Marsh Trophy as the top Canadian Athlete, and he also had the privilege of being Canada’s flag-bearer during the Closing Ceremony in Athens. This was an honour that he was lucky enough to do twice, the second of which took place at the 2008 Opening Ceremony in Beijing. Performance-wise, van Koeverden continued to flourish. He followed up his showing in Athens with silver medals at the Olympics in Beijing (2008) and London (2012).

On top of that hardware, the McMaster University alumnus also took home eight world championship medals during that stretch, including two golds, and wound up nabbing a bronze at his first Pan American Games in 2015, when they were held in Toronto. Van Koeverden’s result at TO2015 may not have been what he wanted, but the chance to compete on home waters did produce some fond memories.

“I really enjoyed being part of the team,” added van Koeverden, who also contributed to TO2015 as a member of the Canadian Olympic Committee’s Board of Directors. “I was in the Rogers Centre [in June], just reminiscing about the Opening Ceremony and how great it was. I think the Pan Ams were a huge win for Southwestern Ontario, and in Milton, specifically, we got the velodrome and we get so much out of that as a community.”

Niagara was another community in Southwestern Ontario that also benefited from the 2015 Pan Am Games, highlighted by the improvements made to the Welland International Flatwater Centre (WIFC). Set to host the canoe-kayak, open water swimming and triathlon events at next year’s Niagara 2021 Canada Summer Games, the WIFC witnessed first-hand van Koeverden’s bronze medal performance as it hosted the canoe and kayak sprints at TO2015.

“[The WIFC is] an awesome place and an awesome facility. It’s great that it’s repurposed waterways for recreation,” said van Koeverden, who raced in Welland nearly every summer from 1997 to 2016. “There’s lots to do in Welland. [The Flatwater Centre is] one of those courses that is great to follow along, you know, so it’s a good idea to have a bicycle. You can also always ride into Dane City if you have a bike.

“[Niagara] is also one of the best parts of Ontario for wine and agriculture. If people are into food and drinks, there’s a lot going on in Niagara-on-the-Lake, so I would certainly encourage people to take advantage of that while they are in town.”

Van Koeverden’s stop in Niagara during the Pan Am Games, along with the rest of his 2015 season, proved to be an important turning point in his career. By then he wasn’t just competing — he was also advocating, working on governance issues and acting as an ambassador for Right to Play and WaterAid Canada. And although he wound up making the trip to Rio 2016 for his fourth Olympic appearance, that competition proved to be his last.

“When I quit kayaking in 2016, it wasn’t because I didn’t want to be a part of Team Canada anymore,” said van Koeverden. “It was because I wasn’t motivated to race my kayak anymore for Canada. So, I spent the better part of two years trying to find another way to contribute, to be a part of a team, and to continue to work for Canada in a way, and work for Canadians.”

That commitment to his country is what would eventually lead him to Parliament Hill. In October 2019, as a Liberal candidate running in the riding of Milton, Ont., van Koeverden defeated long-time incumbent Lisa Raitt in his first year in politics. The 38-year-old, who now serves as the Parliamentary Secretary to the Minister of Diversity and Inclusion and Youth and to the Minister of Canadian Heritage (Sport), cited his humanitarian work abroad as a big reason why he moved into the political arena.

“The more I travelled, particularly internationally, the more I realized the more fortunate we all are to be Canadians, and that doesn’t just happen by accident,” claimed the Liberal MP.

“You’ve got to elect a good government if you want a great outcome for Canadians, and people deserve hard-working and honest representation. And I saw a lot of examples of that in Canada, and I wanted to join that team, and participate, and contribute to the country that has offered me so much, and continues to offer people coming here from other countries and Canadians who live here so much.

And to think that his path might have been different had his mother never seen that ad in the Oakville Beaver for the Burloak Canoe Club. But lucky for us, she did, and our country was made a little bit better for it.

Interested in more articles like this one? Sign up for our N21 Action Newsletter at niagara2021.ca/get-involved to receive alumni stories, updates about Niagara 2021, and to learn about opportunities on how you can get involved with Canada's largest multi-sport competition.